Congratulations Dani Baccus A+ Athlete of the week 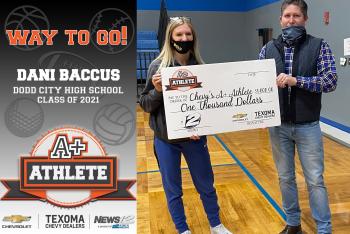 Zach Lovelace with Classic Chevrolet and Texoma Chevy Dealers came to present Dani Baccus with a $1,000.00 scholarship for being our A+ Athlete of the Week.

Dani is one of the most decorated athletes in Dodd City history. She has been named all state in basketball three times. She led the Lady Hornets to the state finals twice with a chance to return this year. She has been named to the all-state tournament team twice and was the district player of the year. Dani is extremely competitive and has put in countless hours of hard work to get to where she is today as Point Guard.

She is a key player on the Dodd City volleyball team where she has also been named all-state and is a member of the band.

And in the classroom, Dani is an honor roll student and has been named academic all-district three times. She has earned an academic scholarship for college.

She has a strong work ethic! She is an exceptional independent worker, but she is also an excellent team player. She is always willing to jump in and help and support in any way she can.

And that’s why Dani Baccus is Texoma Chevy Dealers A+ Athlete of the week! 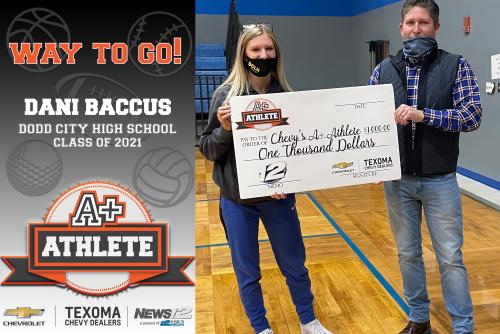