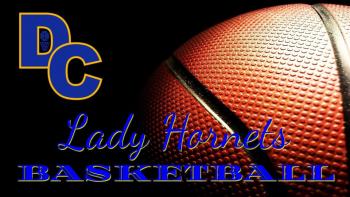 DODD CITY -- Nicknames are often a part of life.

"When I was in third grade, a teacher started calling me that," said Baccus of her continuing moniker. "I have a bunch of nicknames."

Remove the 'y' and it describes how the second-year varsity starter has scored -- especially of late -- this season: Like a boss.

Take the last month: She has produced prodigious points and been the top scorer each game during the second-ranked Class 1A Lady Hornets' still-undefeated start.
During the last seven games -- Dec. 19-Jan. 18 -- Baccus has in each surpassed 20 points six times, scored in the 30s in three and had 43 recently in another game.

"We've known since junior high that she is a natural scorer," said Dodd City head coach Alex Stephenson on Jan. 18.

"It took her a season to get accustomed to the speed of the varsity game, coming from junior high," said Stephenson. "That's a different animal in itself."

Baccus, who continues to show prowess behind the 3-point arc, also credited a change in her positioning on the court -- after an observation on a screen.

"They are sisters, but both are so different," said Stephenson, who has coached each since junior high.

"Dani is more of a floor general: a pass-first point guard," he said. "Rion is a scorer."

During her freshman season, the younger Baccus stepped into the Lady Hornets' starting line-up and helped Dodd City reach its sixth-consecutive regional tournament. The Lady Hornets lost in the Region III-1A semifinals to Lipan -- one of three defeats via eventual state finalist teams during the 31-5 effort last season by Dodd City.

However, she didn't get to experience what sister Dani, senior Journie Hilliard and every Lady Hornet had the previous three seasons: reaching the 1A girls state basketball championship game.

"The pain of the loss last year and the way we did still stings," said Stephenson. "I tell them that if you use adversity right, it's a ticket to get to where you want to be now ...

"This team plays so well together," he said. "Every night, there can be a different leading scorer.

"The thing is: They enjoy playing with one another."

"We are a different team than last year," said the older Baccus sister. "We work a lot better together."

That cohesion has showed, despite graduating a couple of standouts off the 2019-20 team.

The Lady Hornets have again posted victories over much larger and ranked opponents -- such as 51-46 win at perennial 4A state tournament team and champion Argyle on Nov. 24 and at 3A Gunter, 52-47, on Dec. 29, just to name a couple. (The younger Baccus showed her toughness in the latter win, scoring a team-leading 21 points -- despite needing stitches in her chin afterward due to an injury sustained during the contest.)

"I want to schedule tough games," said Stephenson. "I tell them: 'If we can lose together, we can win together."

The tougher tests have been needed, considering the juxtaposition again with Dodd City's District 23-1A games -- one-sided wins where the Lady Hornets have yet to allow 20 points, through Jan. 18.

An 11th-consecutive postseason and ninth-straight district title again are most likely for Dodd City, which continues to take a short-term approach.

"We never talk about going to State, regionals or anything," said Stephenson. "We focus on day-to-day and improving as a team.

"I don't believe in goals," he said. "We try to play to our strengths.

"By doing that, you get where your potential is by the end of the year."