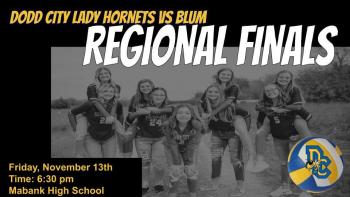 CALLISBURG -- Dodd City's 2020 volleyball team has advanced where only a few Lady Hornets squads in the sport in school history have been.

The win put the No. 6 Lady Hornets (19-4) in their first volleyball regional final since 2001 -- when Dodd City made its third of three-consecutive program-best trips (1999-2001) that deep in the postseason of the sport.

An ace-filled win in the regional quarterfinals advanced the Lady Hornets to their first regional semifinal in volleyball since 2016.

Dotson had eight kills with two aces and Graves added seven assists, two aces and a kill for the Lady Hornets.