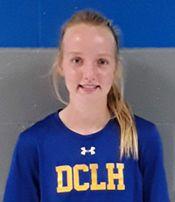 Mauppin finished sixth in the overall standings of the girls 3200m Region III-1A race in 13:39.64 on Nov. 9 at the Jesse Owens Memorial Athletic Complex in Dallas to qualify.

Last fall, Mauppin placed 25th in 13:06.7 in the 1A girls state race and earned all-state honors in 1A in cross country from the Texas Girls Coaches Association for 2019.