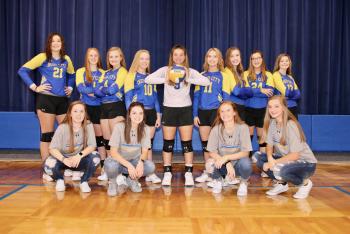 Lindsay -- Monday night's regional quarterfinals match played at Lindsay High School was a clash between the District 12-A champion Dodd City Lady Hornets and Bryson, the top team out of District 10-A.

Sophomore Journie Hilliard led Dodd City with 20 kills and five blocks, while senior Sarah Brent slammed down 15 kills. Cassandra Woodlee put down a pair of kills led the Lady Hornets at the service line with four aces. Tori Dotson also had a kill.

Camryn Hubbard came up with two digs, with Paizley Vaught and Kylee Graves each getting under one dig.

Bryson will advance to the Region II-1A semifinals to be played at Midlothian High School on Saturday, November 9.