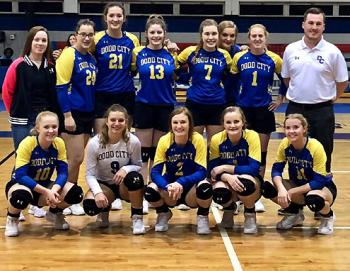 Gainesville -- After winning district and drawing a bye, the Dodd City Lady Hornets made their entrance into the playoffs in dramatic fashion Thursday evening by sweeping Gold-Burg in an area round match played at North Central Texas College.

Sarah Brent and Journie Hilliard both finished with 14 kills, Cassandra Woodlee had a pair of kills and Tori Dotson put down a kill, with Delaney Pilliod passing out 31 assists to the Lady Hornet hitters.

Kylee Graves came up with three digs and Paizley Vaught had a pair of digs.

With the victory, the Lady Hornets earn the right to take another step deeper into the playoffs.

Dodd City will play Bryson on Monday, November 5 in Lindsay at 6:00 p.m. in the regional quarterfinals.