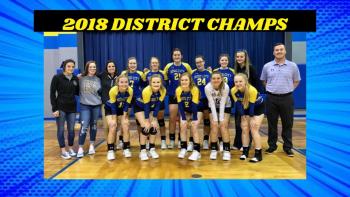 Dodd City -- Journie Hilliard and Sarah Brent combined for 34 kills as the Dodd City Lady Hornets defeated the Wolfe City Lady Wolves in a five-set thriller to determine the District 12-2A championship.

In an exciting fifth set, Dodd City came out on top, 15-13, giving the Class A program the championship in a district with several Class 2A teams.

Journie Hilliard had a big night at the net with 19 kills and seven blocks. Sarah Brent finished with 15 kills, while Cassandra Woodlee and Tori Dotson both put down four kills.

Delaney Pilliod dished out 42 assists to her hitters.

Kylee Graves had four digs and Paizley Vaught had a pair of digs.